see the cat? see the cradle? 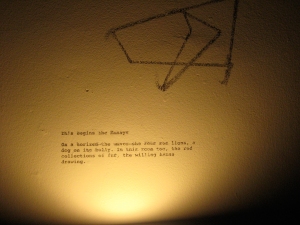 The confrontation of a hand puzzle.

A bit of manipulation, a twinge of trickery, and nimble hands help. Yet, the willingness to succumb is the secret. One of the oldest in the world, Cat’s Cradle transcends language, culture, and may – in fact – be the key to world peace.

I remember shying away from the game as a child. Similar to playing whiffle ball in gym class…i knew attempting to outwit my opponent and twirling that string through my fingers was not going to end well. It seemed like a secret language, like I must have missed that session of recess when every girl learned the tricks of cat’s cradle. I never understood it and still, when confronted with a piece of string, I make it up. Fictionalizing the reality of the game is the secret. It is a secret language, but it’s your own, based on your own sensibility, your own decisiveness, your own path.

Like Flannery O’Connor’s point of grace, Joeseph Young weaves moments of exchange and intimacy into each tale he tells. I’m confronted with the woven string of his words, a small narrative placed uniquely and tightly into each netted opening. Every word specifically chosen and placed awaiting my move. I am confronted with his fiction. Fiction and slight nods. A nod to himself, to his past. A nod to the fictionalized reality of his experience within the space, his present. And many gifts of sensibility sprinkled throughout. The mini-narratives are often transactional moments between two objects/beings, followed by odd, open-ending twists. He manages to create an environment, a purpose, and an absurdity with one sentence.

The physicality of the hand is omnipresent in the work. As tool, as object, as story teller, as device – the hands hold truth. Written or other wise. Joe uses his hands to make the work, to write to transfer each word manually to the wall. And so do his characters: an artist, a photographer, an ink maker. Each hand tugging yet another string.

It’s as though he knows something about me I don’t know he knows. His own little secret and each narrative is a clue for me to figure out what he knows and how he knows it. I have to keep looping the thread through my fingers and twisting and turning to find that in the end the trick is on me. Coincidence may be to blame, but I believe coincidence to be fate in sheep’s clothing…so there! It was meant to be. I’m reminded of a door I have closed and to keep opening the other.

“AZ/PA
Two
States
Watch
Each
Other
Across
a
narrow
line,
ocotillo
and
bull-
doser.”

She dreamt of Ansel

hands. She woke then,

watching the movement of

people on the granite street.”

It is strange, it seems after your life is strangely affected by something you can’t stop hearing about it in various variations. I was in my apartment after work one night and decided to watch a movie on hulu. One of my guilty pleasures is really bad movies, mind numbing if possible. I just want to stare at the screen and not think for about an hour. This usually happens about once a month and due to the limited selection this month’s movie was “Family Man” starring Nick Cage. Cage plays a man who has put his finances above his relationship with his first and only love…Tea Leoni. You see, Cage got on the plane for London for graduate school instead of listening to Tea as he boarded begging him to stay and choose “us”. It is after a brief encounter with Don Cheatel (an angel) when the “it’s a wonderful life” plot line kicks in. He wakes up in Jersey with two kids and his wife…you guessed it…Tea. In this reality he got off the plane and chose “us”. Hilarity ensues as he tries to get used to his new lifestyle and once he does, he is then thrust back into his own reality, the lonely life of money. He realizes he still loves her and decides to find her. But the real clincher of the story is what it takes for him to realize he still loves her….his copy of “Cat’s Cradle” and the bookmark, her photograph.

A man broke into the

He wheeled away cars of

books and gave to

This morning one of the stories on NPR, “Kalamazoo gives free education, will Baltimore be next?”

Coincidence. me think not.